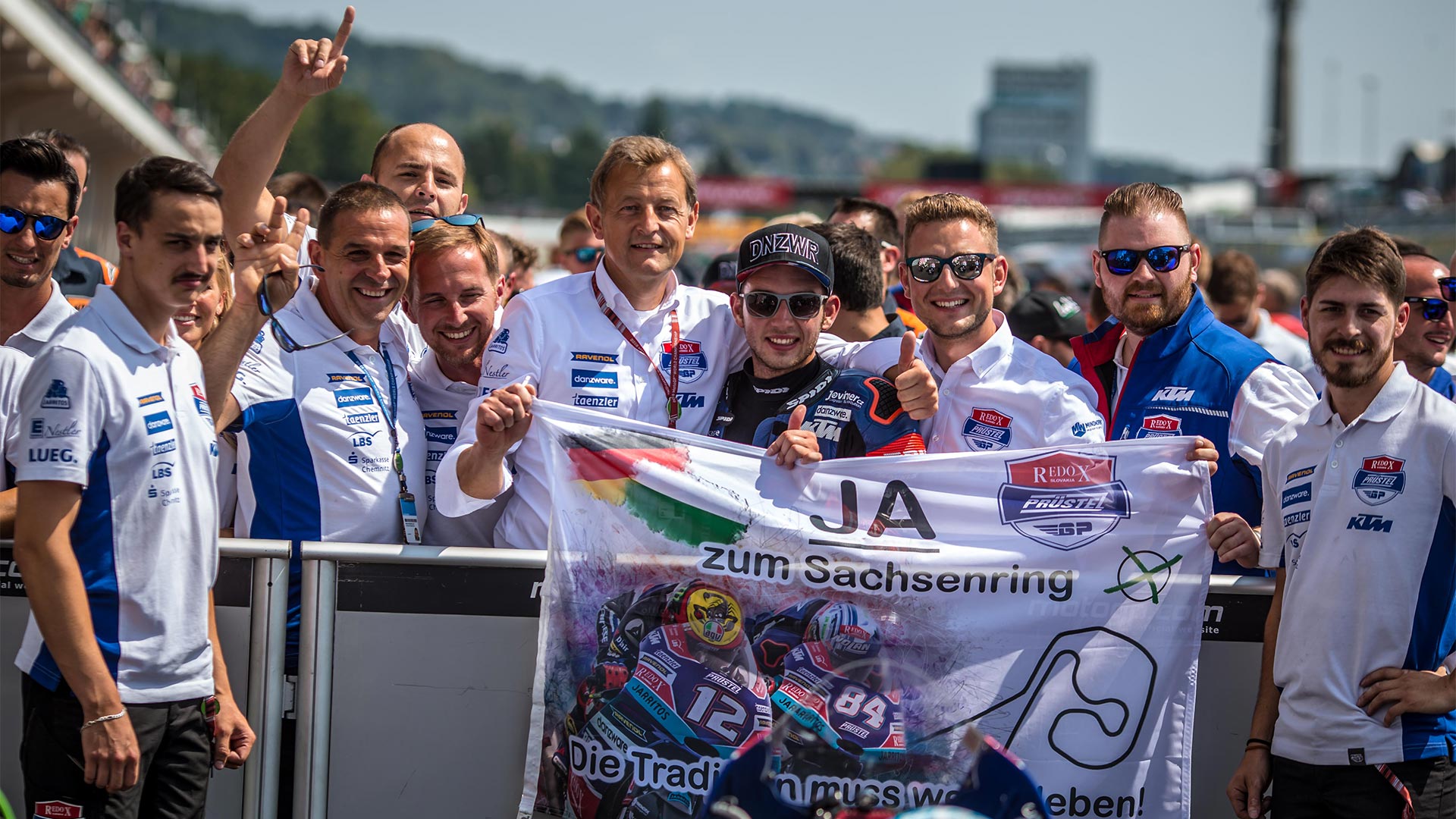 Together we grow in our challenges

Ingo and Florian Prüstel have taken their enthusiasm for motorcycle racing into their own hands in 2016. The former team sponsors live their passion and combine it with the love of their roots and the region.

“Just as speed, flexibility, organization and professionalism determine my professional life and my success, these qualities are also the key supporting elements in the PrüstelGP team.” (Ingo Prüstel, Owner PrüstelGP GmbH)

It is precisely these demands on teamwork that guarantee cohesion and success.

“All this can only be achieved with strong partners. Motorsport friends and partners on our side are driven by exactly the same ambition - the will to win and the common goal. Our regional affiliation and responsibility are also important to us. “
(Florian Prüstel, Managing Director PrüstelGP GmbH)

Traveling the world, at the Sachsenring at home

In the 2018 season, the PrüstelGP team will start with the Austrian motorcycle manufacturer KTM. On the driver side, the Saxon racing team will go head-to-head in the Moto3TM World Championship with experienced Czech driver Jakub Kornfeil and Italian Marco Bezzecchi from the VR46 Riders Academy run by Valentino Rossi. The 2018 season should start better than expected. Already in the second race in Argentina, the ambitious Italian # 12 Marco Bezzecchi scored the first win of the season for Redox PrüstelGP. It should not be the last podium place, followed by others in Texas (USA), Jerez (Spain) and Mugello (Italy). Since Jerez, Marco Bezzecchi has been World Cup leader, delighting fans, sponsors, the team and KTM alike. Jakub Kornfeil also got off to a good start in the season, he is consistently in the top 10 ranks and is increasing from race to race.

"It's an indescribable feeling not even two years to work from bottom to top. There is a lot of commitment, ambition and, above all, motivation, but we did it. We have shown the world that even a small racing team from Saxony can compete in the world class. We are incredibly proud of that and, not least, we owe it to our loyal sponsors and partners. The good cooperation in the team and the constructive and trusting cooperation with KTM do the rest. Despite the media hype, we are currently not distracted and pull our plans and structures through. We are quite young as a team and still have a lot to learn. Here in the company PRÜSTEL Logistics is the motto "Together we grow to meet our challenges" and of course that also counts in the PrüstelGP racing team "- says team boss Florian Prüstel.

In addition to its involvement in the Moto3TM World Championship, the team also operates the newly developed "PrüstelGP Academy" junior project with seat and training hall directly at the Sachsenring. The Academy promotes sustainable young talents in Germany and prepares them for the possible way into the World Cup. In 2018, three German junior riders will be supervised, including # 94 Marvin Siebdrath in the European Talent Cup (ETC), # 09 Freddie Heinrich in the RFME Spanish Moto4 Championship and # 28 Lennox Lehmann in the ADAC Junior Cup